Success Coaching From Start-Up to Guru 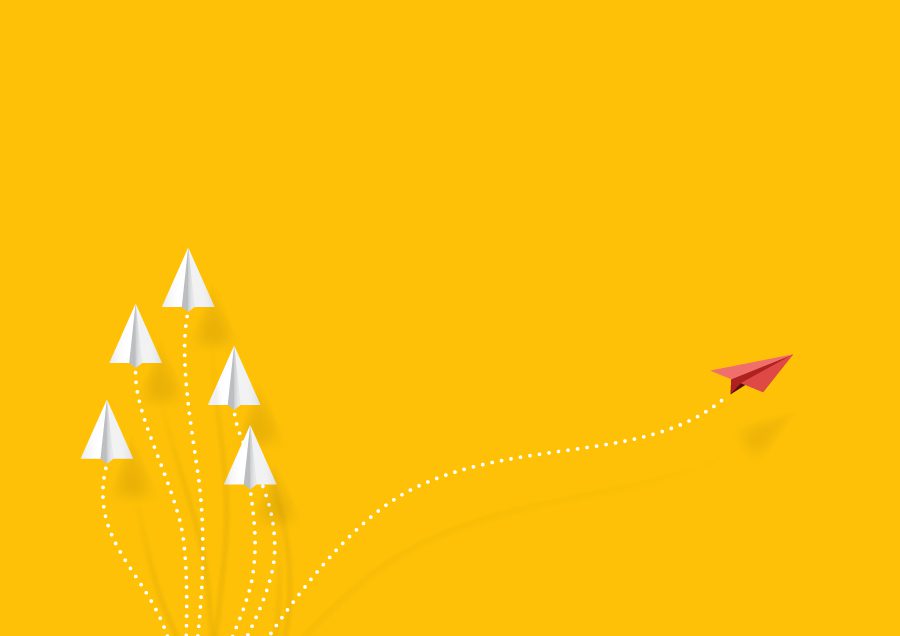 There are so many reasons why people leave a job. For a lot, however, it’s because their managers didn’t show that they cared enough.

As an example of this, I was recently in a training session with about 15 people and my trainer asked the audience why people in the room left their last job. I was surprised to see that about half said it was to get away from their line manager or boss. Such was the breakdown in the relationship that, for many in the room, they told stories of how they had simply wanted to get away from the stress involved in working for such a person.

Then, back in January this year, when I was interviewing a senior director of a company we work with, I heard him say a well-known phrase (“You leave your job because of your manager”) but then he said something else that personally I’d never heard before.

“You leave your job because of your manager…and stay because of best friends.”

It got me thinking. Should we be encouraging friendships at work?

From my experience though, I don’t think I’ve ever heard anyone ever be so explicit about setting such a corporate objective as to encourage people at work to make friends. In fact, I’ve hear the phrase “You go to work not to make friends”? a few times over the years.

For me, this sweeping statement is just an example of a display rule.

Display Rules are those unwritten rules that come out in everyday language and if they are relied upon, and deemed to be set-in-stone, then this can be dangerous territory, especially for the recipient being told to adhere to the display rule in question.

…so, let’s look at a couple of these and view them from an alternative angle.

If boys shouldn’t cry then what happens when they feel really down and need someone to be compassionate with them? To listen to them, understand them. To validate how they are feeling? If boys shouldn’t cry then think about the potential installation of negative, limiting beliefs this could create in a young person. Limiting beliefs that might even affect their entire outlook for the rest of their life.

Don’t listen to others. Listen only to your gut. According to who? What then about feedback? We grow as human beings when we learn through feedback. What happens if your gut is wrong? Your gut reaction forms over time-based upon how you deal with any given repetitive scenario or situation and, in many cases, yes, the gut is to be relied upon, but not always. What happens if the way you have dealt with such situations in the past could have been handled better?

Employees shouldn’t take problems to their managers, only solutions

What about the employee who is lacking the confidence or skills to deal with a challenge? Should they just get on with it? What would this do to their sense of confidence over time especially if they felt that they shouldn’t take a problem to their manager? How about if, instead, they were encouraged to ask for advice and then their boss coached them to discover the answer for themself? Wouldn’t that mean that over time they would learn new skills and ways of dealing with challenges? Of course, it would and it does in my experience.

So, the saying, “You go to work not to make friends” which implies it isn’t healthy to encourage friendships at work, is, I feel, just another case of a display rule in action.

Are display rules always wrong to use?

I feel personally that the positive intention of some display rules can be useful in certain contexts, but I think, for me, that it’s the use of the language that I find worst about display rules. A lot of them are based on imperatives. They command. They instruct.

The intention behind this is to say that, at times, perhaps a boy is being too sensitive and getting himself worked up over something (that might be) relatively benign. The intention of the display rule is honourable. But the language is not supportive.

How about rephrasing it by asking the boy “How about we break the problem down……..now that you can see it in a different light, is it as much of a problem as you first thought? Do you feel that it might be better for you to not get so upset about it?”

By simply rephrasing the display rule and getting the boy thinking about whether it is worth getting so upset over, his internal voice might talk to him and potentially reposition the problem and dilute its intensity.

Think about your best ever party or social gathering. One where everyone was in such a great mood that everything was just flowing. Conversations, emotions, laughter, dialogue, shared ideas, jokes. Trust was being forged, relationships cemented, great memories were being created…can you remember how energised you felt the next day?

Now think about your dearest friend. Was there ever a time when your friendship was tested? What happened? Did your friendship survive? If so, could it have been thanks to the fact that true friends are more flexible with each other and more understanding of each other’s point of view?

So whoever said that we shouldn’t try and get these things to happen in the workplace?

What proof exists to show that if we go to work to work and not to make friends that it provides more benefits than the alternative?

Not being friendly at work with each other reduces trust, breaks relationships, causes friction in dialogue and laughter, stops exploratory conversations and prevents people sharing their best ideas. How does that benefit any company?

As you may have read in my last blog, highly-enthused employees that trust each other can each put up to £24,000 onto your bottom line. And losing an employee can cost around £30,000. Those are BIG numbers.

So promoting friendships at work = profit.

Why do some managers think that friendships in the workplace are bad?

I’ve met quite a number of managers over the years who think that if people are friendly at work that they’ll take liberties. Too much friendship means too many cigarette breaks, too many conversations at the coffee machine, long lunch breaks, too many nights out together. Great. Personally I think this is exactly what to encourage. After all, an enthused employee will get the job done anyway.

The conversations whilst having a cigarette or at the coffee machine can often be where the best ideas come from. People are away from their desks. Often this is where they get space to think. It’s where relationships are better cemented and when relationships are at their strongest we have the following happen:

Over the years I’ve met some managers who think negatively about nurturing friendships. They say you’ve always got to keep employees at arm’s length.

But why I ask?

If you make your workforce feel valued and cared for, and encourage friendships, then all the great things we talked about above, start to happen.

The world’s worst manager? I think I found two of them

I recently had a pint with a pal 2 weeks ago. He works at one of the airports – I won’t tell you which one nor the job he does.

He told me about his two managers who, according to him, seemed to walk around ready to pounce when he and his colleagues stepped out of line.

Morale was down, productivity was at a bare minimum, people were trying not to get sacked by conforming to a set behavioural patterns as implied by the two managers. People didn’t see any future career prospects, but the best thing about it was that this friend of mine, and his team, probably come into contact with about 6,000 customers a week. That’s 312,000 people a year. Just think about how much damage this could be causing all because these 2 managers, just 2 people out of 312,000, have an outlook on life-based upon managing people with a command-and-control style (instead of leading, supporting, and encouraging their team).

The solution? Fire them?

No, work with them to become better leaders and to tap into their human side.

Ken Blanchard created a powerful model some years ago. Instead of the CEO being at the top of a pyramid, being supported by his or her team underneath him or her (like these managers above), Ken Blanchard flips the pyramid upside down so that the CEO is on the bottom and the tip of the pyramid is resting on the floor. The tip of the pyramid, and the CEO, is what everything is supported by. The CEO supports the next line of managers. They then, in turn, support their teams… and the people who are front-line, feel so supported and special, that this rubs of on the customer.

I also love the metaphor since the entire structure rests on such a fine balancing point. It’s a great metaphor to show the skill that is required in relationship development by the person, or the people, in the C-Suite in order to balance the entire pyramid and make sure it doesn’t fall over.

And some of those leaders I have met. Some of the MDs and CEOs who I have worked with over the years are an absolute delight to be with. They are infectious to be around and, guess what, their companies have seen huge successes as well.

Friendships and leadership are strongly linked

Research conducted by James Kouzes and Barry Posner shows that when people are asked about who plays the most important and pivotal role as a leader in their lives, there is a definite leaning towards leaders who are closest to them. “Leader role models are local” as they put it.

This comes as no great surprise to me as an NLP Practitioner. We have the ability to influence people greatly thanks to our proximity and how we interact with another person. By reading the verbal and non-verbal cues of another person, it allows us dynamically to respond to what they say in an engaging and encouraging way. One of the easiest techniques I use when I’m trying to build rapport with someone else is to simply listen to them and show an interest in what they are saying.

I’d argue therefore that actively encouraging friendships between line managers and their direct reports can be seen as a golden opportunity to impact the performance of the company as a whole.

After all, a huge source of why people feel dissatisfied with work is due to stress. Encouragement, appreciation, and support from those people you role model is a great killer of the debilitating effects of stress and set out to be friendly to someone that you manage is a huge step in the right direction to help them manage any anxiety they may be feeling at work.

Are friendships, therefore, to be encouraged or not at work?

I’ll let you, the reader decide.

All I can say is that according to this Gallup Poll I found online, there are some pretty compelling statistics out there. 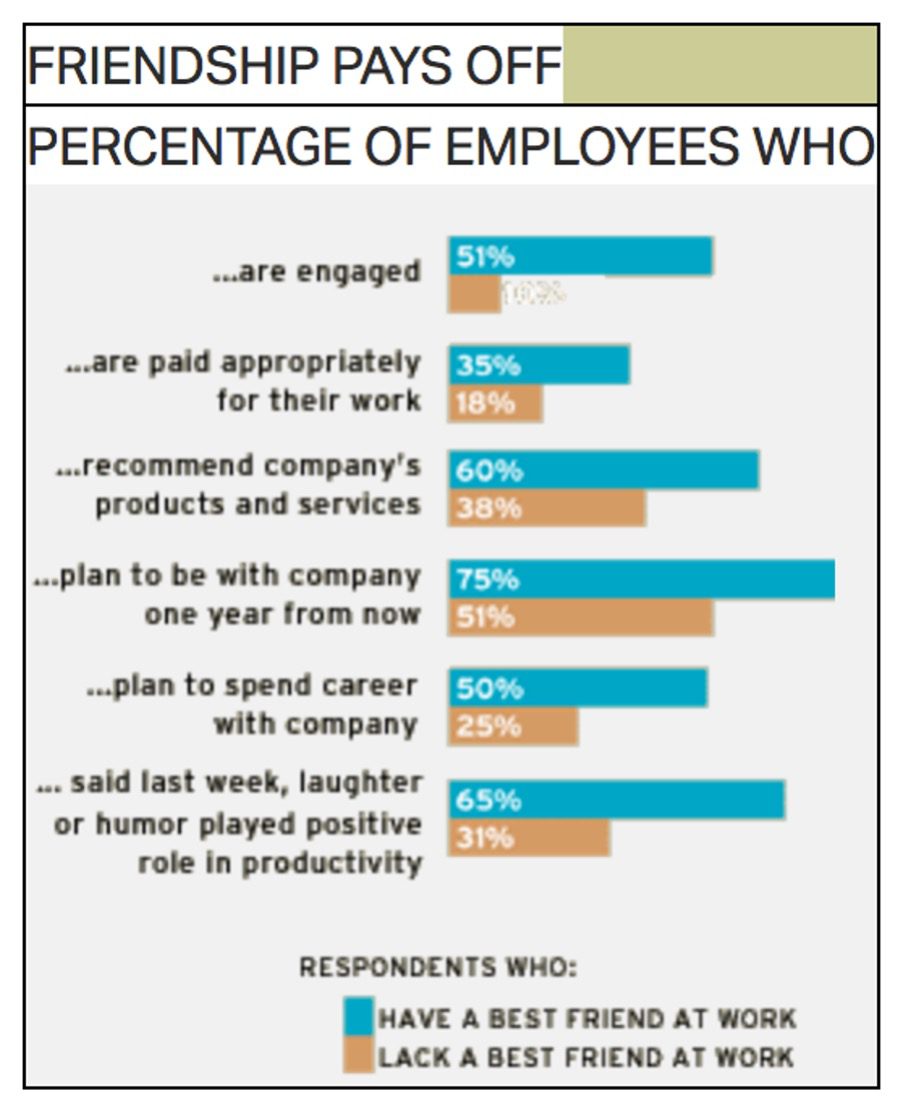 All I’d say is that if trust, strong relationships, happiness, shared ideas, dialogue, caring… all come about thanks to true friendships outside of work, why the heck don’t we start a movement where we encourage more people to find best friends at work?

…and as for display rules…pah!